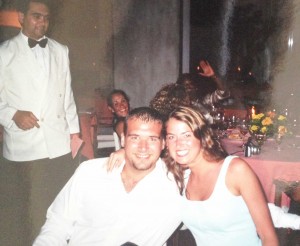 Every couple has a wonderful or funny or quirky memory from their honeymoon, right? For Tony and Giovanna, that memory involves a Bellini, the famous IL San Pietro restaurant in Positano Italy and the even more famous Oprah Winfrey! It was the year 2000, and Tony and Giovanna were honeymooning in Positano, Italy. The couple had reservations to dine at Hotel Il San Pietro’s Michelin star restaurant, which serves the finest traditional regional and Italian haute cuisine. They were welcomed and escorted to their table. On the way, they heard a voice they recognized, speaking English. It seems someone and her friends had been seated at one of the worst tables in the restaurant, and the friends weren’t happy. The “voice” belonged to Oprah Winfrey, and she was very graciously telling her friends that the table was lovely, and they should enjoy their meal. It seems that no one at Hotel Il San Pietro recognized her, and she was rather enjoying it! On the other hand, the staff could not have been kinder to Tony and Giovanna! They talked with them in Italian, a language both had grown up speaking. When they learned that Tony was a pizzaiolo and that the two were on their honeymoon, they treated him like the celebrity, even taking him on a tour of their kitchen and famous wood oven.

How They Met Oprah

When Tony and Giovanna asked their waiter to take a photo of the two of them, Oprah thought they were trying subtly to get a picture of her (maybe a little). She waved in the background. The inadvertent “photobomb” got everyone chatting! Tony and Giovanna were able to help Oprah translate the menu. They helped the group of ladies order, and they shared stories of their travels and shopping in Capri. Oprah asked Tony to teach her a few Italian sayings. One was “God bless you”- Dio di Benedici“. 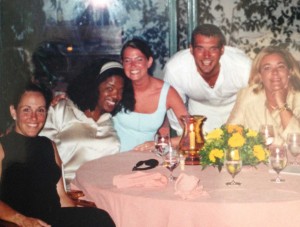 Giovanna and Tony with Oprah and her friends.

As a thank you, Oprah sent over two Bellinis. Though the drink had been invented by founder of Harry’s Bar in Venice, Italy sometime between 1934 and 1948, the couple had never tasted it nor even heard of it. But hey certainly enjoyed them!

What is a Bellini?

A Bellini cocktail is a mixture of Prosecco sparkling wine and peach purée or nectar. This cocktail originated in Venice, Italy. It is very similar to its better-known cousin, the mimosa, which is orange juice and champagne. Today, there are many versions of the Bellini and the Mimosa. To celebrate Valentine’s day, and Tony and Giovanna’s special memories from Positano, Gio Italian Grill will be featuring a special raspberry mimosa all weekend. The special Gio Mimosa is a delightful combination of sparkling white wine with Chambord in a champagne flute.